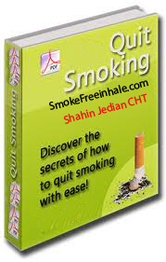 Download this Audio-Therapy Instantly and Begin a New Life.

This Audio-Therapy Program consists of:

for a refresher ( listen again)

This Audio-hypnosis program is intended to be listened to the entire 40 minutes in one shot.
Make sure you are in a quiet place where if you were to dose off a bit, it would be perfectly OK.
NEVER LISTEN WHILE DRIVING

Smokers trying to quit sometimes use nicotine patches to fight their tobacco dependence. But patches don't work for everyone and certainly do not remove your Identity as a Smoker. New research suggests that becoming a Non-Smoker is more effective if used in combination with hypnosis, just as they tend to work better when used in conjunction with professional counseling. A recently published study showed hypnotherapy to be as effective as standard behavioral counseling when combined NLP techniques in helping smokers to quit and stay off cigarettes for years to come.

During hypnotherapy, Carmdy explained, patients are coaxed into a relaxed state and then provided with a series of skills for coping with withdrawal symptoms and the urge to smoke. Patients are given an audiotape of this training to reinforce these messages at home, and over time it is hoped they will gain increased confidence in their ability to stay off cigarettes for the long term.

Hypnotherapy is one of many alternative therapies gaining wider acceptance at some of the nation's best hospitals and medical research institutes.

The study, conducted at the San Francisco VA Medical Center and the University of California-San Francisco, was published in the May issue of Nicotine & Tobacco Research. A total of 286 participants were randomly divided and received either hypnosis or standard behavioral counseling aimed at smoking cessation. During standard behavioral counseling, patient and counselor discussed the dangers of smoking and the benefits of quitting. Participants in both groups were seen for two 60-minute sessions and received three 20-minute follow-up calls to reinforce the messages discussed in either the hypnosis or behavioral counseling treatment sessions.

Hypnosis was particularly helpful for would-be quitters who reported a history of depression. That finding suggests that smokers who have struggled with depression—or perhaps with other psychiatric conditions, Carmdy says—might someday receive hypnosis as part of the quitting process.

Brian Hitsman, assistant professor of preventive medicine at Northwestern University's Feinberg School of Medicine, called the results encouraging and added that the hypnotic intervention evaluated in the study may have the potential to serve as another nonpharmacological treatment option in addition to standard counseling. But Hitsman emphasized that hypnosis may boost smoking cessation rates only when combined NLP.

What lies ahead for the field of smoking cessation? An important focus will be to evaluate the extent to which the effectiveness of hypnosis or behavioral counseling can be improved if patients remain on them long term (more than 12 months), Hitsman explained. He takes the perspective that nicotine dependence should be treated more like a chronic medical condition, much like the approach taken in the management of diabetes. "For most people, smoking begins in adolescence and persists across the life span, with multiple periods of remission and relapse. Acute care is the current model, with treatments typically given up to 12 weeks. For many, successful cessation will require ongoing intervention by listening to the audio programs again as a refresher"

According to statistics released late last year by the Centers for Disease Control and Prevention, more than 45 million people in the United States smoke. Despite antismoking ad campaigns blanketing the country, cigarette use remains the leading preventable cause of death in the United States, accounting for 1 death in 5. Smoking claims 438,000 lives each year. Kentucky, West Virginia, Oklahoma, and Mississippi top the list of states with the highest prevalence of current smokers, while Utah, California, and Idaho have the lowest percentages of smokers lighting up in the nation.